Professor Gabe Knight is the Department Coordinator for and teaches in the Accounting Department at Scott Community College in Eastern Iowa. In the Spring 2014 semester, he participated in this study by using ORION in his ACC 121: Principles of Accounting course. The course has one in-person section of 21 students.

Professor Knight initially did not require his students to use ORION, but he decided to include it in their grade part way through the course. As a result, 95% of the students engaged in at least one chapter with ORION. Students had the opportunity to engage with up to 12 chapters of content, with over one-third engaging with at least 8 of the chapters. The typical student engaged with ORION for 5.8 chapters. Students spent an average of 102.1 minutes engaging with ORION, with 10% spending more than four hours with ORION. Professor Knight had four students who dropped the course. While all four students engaged with WileyPLUS, only one of those engaged with ORION.

Students in Professor Knight’s course are likely to have performed fair to excellent in the class. Over half of the students earned a B (57%), while over one-quarter earned an A (29%). Overall, the students earned an average grade of 3.09 (on a 0.00-4.00 scale). The students’ performance using WileyPLUS and ORION mirrored their overall grade. In WileyPLUS, those who scored 90+ on the homework earned an A-/B+ in the course, which is half a grade higher than those who scored a 81-90 and over a grade higher than those who scored an 80 or lower. In ORION, students who were fully engaged earned an overall grade of A-/B+. In comparison, students who engaged with 6-8 chapters of ORION earned a B+ in the course and those who engaged with five or fewer chapters earned an average of a B- in the course. 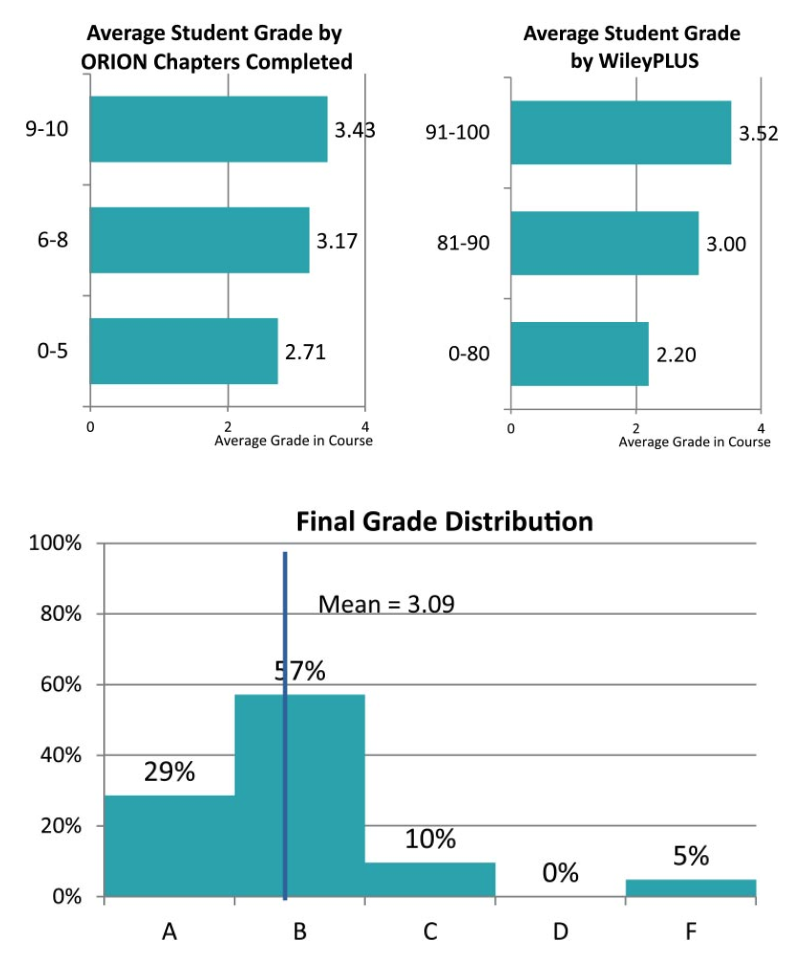 • Performance on WileyPLUS homework is largely reflective of the overall performance in the course.

• The students who put in the extra work in ORION earned an average of a A-/B+ in the course, while those who did not earned a B-. 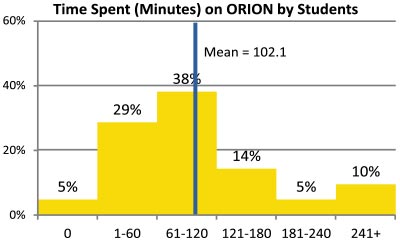