Professor Caroline Falconetti teaches Accounting at Nassau Community College in Long Island, New York. In the Spring 2014 semester, she incorporated ORION and WileyPLUS into her ACC 101: Accounting I course. The course had two in-person sections with 30 students across the sections. There were no prerequisites for the course, but students could not be in remedial courses at the same time.

Professor Falconetti made ORION available to her students, but did not require students to use it. Students had the opportunity to engage with up to 12 chapters of content. While ORION was available to the students for the entire semester, Professor Falconetti made the students aware of it later in the semester. Most of the students attempted two chapters, with an overall average of 2.8. Students spent an average of 44 minutes using ORION, with 20% using it for more than one hour. Students ranged in their performance in ORION proficiency. The average proficiency score across all assessments was 47%, with nearly half of the students averaging below a 40% in their scores.

Professor Falconetti also included homework conducted in WileyPLUS as part of the course grade. Students averaged 84% across the 11 assignments. Nearly two-thirds of the students earned either an A or a B on their WileyPLUS homework. 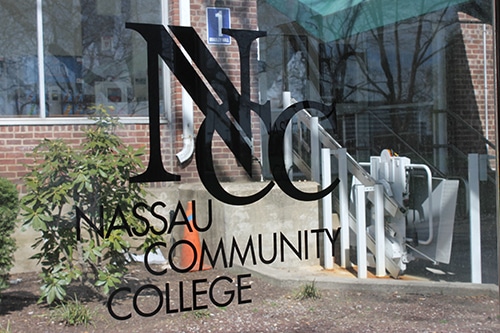 • Students who spent an hour or more using ORION earned half a grade higher than those who spent less than an hour. 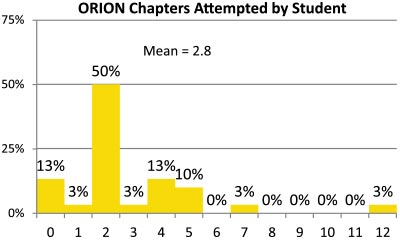 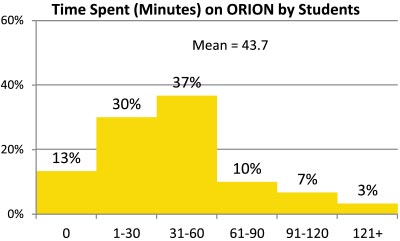 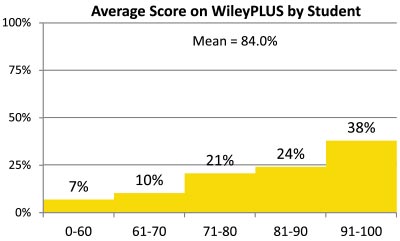